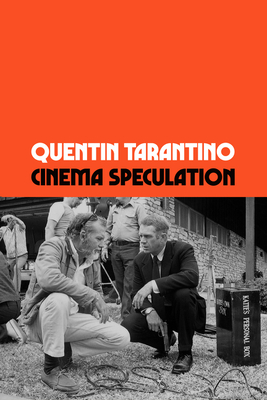 The long-awaited first work of nonfiction from the author of the #1 New York Times bestselling Once Upon a Time in Hollywood: a deliriously entertaining, wickedly intelligent cinema book as unique and creative as anything by Quentin Tarantino.

In addition to being among the most celebrated of contemporary filmmakers, Quentin Tarantino is possibly the most joyously infectious movie lover alive. For years he has touted in interviews his eventual turn to writing books about films. Now, with Cinema Speculation, the time has come, and the results are everything his passionate fans—and all movie lovers—could have hoped for. Organized around key American films from the 1970s, all of which he first saw as a young moviegoer at the time, this book is as intellectually rigorous and insightful as it is rollicking and entertaining. At once film criticism, film theory, a feat of reporting, and wonderful personal history, it is all written in the singular voice recognizable immediately as QT’s and with the rare perspective about cinema possible only from one of the greatest practitioners of the artform ever.

Quentin Tarantino was born in 1963 in Knoxville, Tennessee.  He is the writer-director of nine feature films, the winner of two Academy Awards for Best Original Screenplay, and the author of the novel Once Upon a Time in Hollywood. Cinema Speculation is his first work of nonfiction.

“Cinema Speculation is consistently engaging; with its zinging and zipping observations, its casual opinion-flinging, and its sharp-edged divisions of personalities and eras, it seems designed to arouse fruitful arguments. Like the experienced fictioneer that he is, Tarantino creates images and stories and scenes, tells tales that entice and bewitch even as they invite the same sort of criticism that his movies do. Above all, Cinema Speculation is a vision, in motion, of a Hollywood-centric mind." — Richard Brody, The New Yorker

“Wickedly funny. . . . Tarantino knows what he likes, and he engages the reader with ease. . . . An opinionated, compulsively readable appreciation of the grimy, generally lurid movies of his ’70s youth.”  — San Francisco Chronicle

“That Tarantino’s film reviews should turn out to be every bit as punchy, smart and surprising as his films should come as no surprise: In a sense he’s been writing both for years. . . . Tarantino’s critical intelligence both refracts and reflects. . . . Tarantino is an unabashed celebrant of cinema’s dirtier pleasures.”  — Tom Shone, The New York Times Book Review

“Brilliant and passionate . . . . Tarantino’s joy, generosity, and singular point of view bolster his arguments, and even when he’s taking down his heroes, it’s out of love . . . . Whip-smart and obsessive, Tarantino is great fun and tough to beat.” — Publishers Weekly, starred review