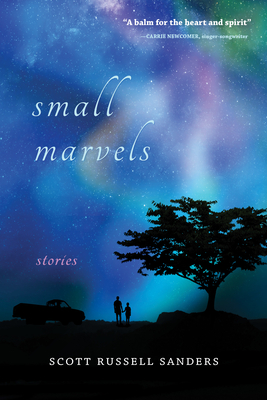 In Limestone, Indiana, a city tucked away among forested hills, peculiar things happen, often in the vicinity of a jack-of-all-trades named Gordon Mills. Centaurs and nymphs shelter in a local cave, alligators lurk in the sewers, warm snow falls on the Fourth of July, cornstalks rise higher than chimneys, and the northern lights shine down on the municipal dump.

Gordon takes such events in stride and deals with them as part of his work on the city maintenance crew. He earns just enough to support a boisterous family, which includes his formidable wife Mabel, their four children, Mabel's parents, and his widowed mother--nine souls packed into an old house that falls apart as fast as Gordon can fix it.

Part folktale, part tall tale, part comic romance, Small Marvels revels in the wonders of everyday life. So, welcome to Limestone, Indiana. You won't find it on a map, but you may remember visiting the place in dreams, the rare, blissful ones in which puzzles are solved, kids flourish, hard work pays off, and love endures.

Scott Russell Sanders is the author of more than 20 books of fiction, essays, and personal narrative, including Hunting for Hope, A Conservationist Manifesto, Dancing in Dreamtime, and Earth Works: Selected Essays. His most recent book is The Way of Imagination, a reflection on healing and renewal in a time of social and environmental upheaval. Based in Bloomington, Indiana, he is a Distinguished Professor Emeritus of English at Indiana University and a fellow of the American Academy of Arts and Sciences.