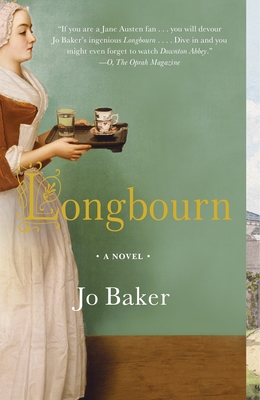 “This is the very enjoyable 'downstairs' version of Pride and Prejudice -- the lives of maids, housekeepers, and footmen at the Longbourn estate. Even Jane Austen herself would be enthralled with this tale filled with fully realized characters, a very romantic plot, and tantalizing glimpses of all our favorite literary figures. I savored each and every moment and I trust you will too!”
— Mary Toni, R.J. Julia Booksellers, Madison, CT

While Elizabeth Bennet and her sisters fuss over balls and husbands, Sarah, their orphaned housemaid, is beginning to chafe against the boundaries of her class. When a new footman arrives at Longbourn under mysterious circumstances, the carefully choreographed world she has known all her life threatens to be completely, perhaps irrevocably, upended. Mentioned only fleetingly in Jane Austen’s classic, here Jo Baker dares to take us beyond the drawing rooms of Regency England and, in doing so, uncovers the real world of the novel that has captivated readers’ hearts around the world for generations.

Jo Baker was born in Lancashire, England, and educated at Oxford University and Queen’s University Belfast. She is the author of the novels The Under­tow, Offcomer, The Mermaid’s Child, and The Telling. She lives in Lancaster.
A NEW YORK TIMES BOOK REVIEW NOTABLE BOOK • A Best Book of the Year: New York Times 100 Notable, Seattle Times, The Guardian, The Daily Mail, Kirkus Reviews

“Rich, engrossing, and filled with fascinating observations. . . . If you are a Jane Austen fan . . . you will devour Jo Baker’s ingenious Longbourn.”
—O, The Oprah Magazine

“Original and charming, even gripping, in its own right.”
—The New York Times Book Review

“A witty, richly detailed re-imagining. . . . Fans of Austen and Downton Abbey will take particular pleasure in Longbourn, but any reader with a taste for well-researched historical fiction will delight in Baker’s involving, informative tale.”
—People

“A bold novel, subversive in ways that prove surprising, and brilliant on every level.”
—USA Today

“A triumph: a splendid tribute to Austen’s original but, more importantly, a joy in its own right, a novel that contrives both to provoke the intellect and, ultimately, to stop the heart.”
—The Guardian (London)

“[A] fitting tribute, inventing a touching love story of its own.”
—The Wall Street Journal

“Engaging and rewarding.”
—The Washington Times

“Longbourn is told with glee and great wit.”
—The Daily Beast

“There’s a finale so back-of-the-hand-to-the-forehead romantic, someone should render it in needlepoint.”
—Entertainment Weekly

“Excellent. . . . In Sarah the housemaid, Baker has created a heroine, living in the same house as Elizabeth Bennet, who manages to shine despite Elizabeth’s long literary shadow.”
—Christian Science Monitor

“Lively. . . . Baker’s vivid passages about the natural world, working conditions and even of sorrow are . . . well detailed and articulated.”
—The Plain Dealer

“Longbourn is a really special book, and not only because its author writes like an angel. . . . There are some wildly sad and romantic moments; I was sobbing by the end. . . . Beautiful.” —Wendy Holden, Daily Mail (London)

“Inspired. . . . This is a genuinely fresh perspective on the tale of the Bennet household. . . . A lot of fun.”
—Sunday Times (London)

“This clever glimpse of Austen’s universe through a window clouded by washday steam is so compelling it leaves you wanting to read the next chapter in the lives below stairs rather than peer at the reflections of any grand party in the mirrors of Netherfield.”
—Daily Express (London)

“Impressive. . . . An engrossing tale we neither know nor expect.”
—Daily Telegraph (London)