The Waste Land: A Biography of a Poem (Hardcover) 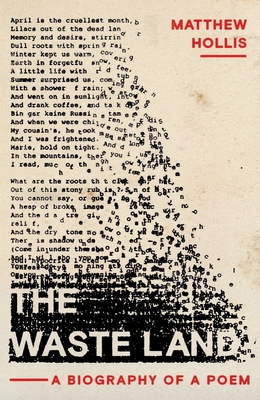 The Waste Land: A Biography of a Poem (Hardcover)

A riveting account of the making of T. S. Eliot’s celebrated poem The Waste Land on its centenary.

Renowned as one of the world’s greatest poems, The Waste Land has been said to describe the moral decay of a world after war and the search for meaning in a meaningless era. It has been labeled the most truthful poem of its time; it has been branded a masterful fake. A century after its publication in 1922, T. S. Eliot’s enigmatic masterpiece remains one of the most influential works ever written, and yet one of the most mysterious.

In a remarkable feat of biography, Matthew Hollis reconstructs the intellectual creation of the poem and brings the material reality of its charged times vividly to life. Presenting a mosaic of historical fragments, diaries, dynamic literary criticism, and illuminating new research, he reveals the cultural and personal trauma that forged The Waste Land through the lives of its protagonists—of Ezra Pound, who edited it; of Vivien Eliot, who sustained it; and of T. S. Eliot himself, whose private torment is woven into the seams of the work. The result is an unforgettable story of lives passing in opposing directions and the astounding literary legacy they would leave behind.

Matthew Hollis is the author of Ground Water, shortlisted for the Guardian First Book Award and the Whitbread Prize for Poetry, and Now All Roads Lead to France: A Life of Edward Thomas, winner of the Costa Biography Award and a Sunday Times Biography of the Year. He is the poetry editor at Faber & Faber, London, and lives in the United Kingdom.
Hollis delves into the deep background from which ‘The Waste Land’ arose... There is genuine suspense in the air, as Hollis invites us to listen out for murmurs and rumors, in the poet’s letters of long ago.
— Anthony Lane - The New Yorker

Illuminating... Hollis blends rich characterization and historical background to create a vivid picture of the London literary scene... Hollis’s sharp prose sings and is poetic in its own right... This fascinating and brilliantly researched history will delight Eliot’s fans.
— Publishers Weekly (starred review)

An authoritative and beautifully written account of the peculiar alchemy that produced the most influential poem of the twentieth century. This is more than the story of T. S. Eliot's genius: Matthew Hollis reveals how the forces of friendship, love, despair, madness, and ambition shaped The Waste Land. Literary history at its finest.

Hollis succeeds brilliantly in bringing the literary landscape of the 1920s to life … [He] turns a complex process of literary composition into a rattling good story. His criticism is personally engaged...and wonderfully compelling as a result.
— Tristram Fane Saunders - Sunday Telegraph

Hollis combines a poet’s sharp eye for details with a cultural historian’s grasp of atmosphere… The richness of [his] analysis is evident on every page.
— Jason Harding - Financial Times

Like the 434-line poem, this book immerses the reader in the political, social and cultural themes of the day… [Hollis] weaves a rich body of research into a fast-paced narrative.
— Ellen Peirson-Hagger - New Statesman

[Hollis’s] quest is for all the seeds of intellectual and emotional pressure that shaped the poem. Such is the energy and engagement of Hollis in this task that you find yourself rooting for the emergence of the poem along with Eliot and his supporters, willing it into life as the book progresses... The evolution of those pages...have become folkloric among Eliot’s readers, but still Hollis invests them with fresh life.
— Tim Adams - Observer

With elegance, wit and...warmth, [Hollis] tells the story of The Waste Land’s difficult birth... At times the book reads, delightfully, as a group biography of modernism’s bright lights.

A great work of art takes on a life of its own. This is the strategy?equally artful and assessive?of Matthew Hollis's superb new study, The Waste Land: A Biography of a Poem. The poem is brilliant, infuriating, moody, conflicted, lyrical, fractured, wildly inventive, haunted by tradition, and as full of eroticism as lament. The Waste Land helped to define modernism and lives on  vividly into our present day. To tell the life story of this poem, Hollis tells the story of the poet, sometimes minute by minute, conversation by conversation. The moving result?as Whitman would say of his own sweeping poetry?is that 'who touches this [book] touches a man.'

— David Baker, author of Whale Fall and professor of English at Denison University