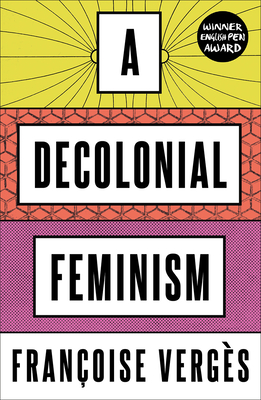 
Usually Ships in 1-5 Days
Winner of an English PEN Award 2021!
"A feminist narrative of how decolonization is a never-ending struggle!"—Veronica Gago, co-author of A Feminist Reading of Debt

For too long feminism has been co-opted by the forces they seek to dismantle. In this powerful manifesto, Francoise Verges argues that feminists should no longer be accomplices of capitalism, racism, colonialism, and imperialism: it is time to fight the system that created the boss, built the prisons, and polices women’s bodies.

"This text was written from a particular position: from within the current struggle for total liberation, from a long commitment to anti-patriarchal, anti-racist, anti-capitalist, and anti-imperialist struggle, and a long engagement with feminist theory and practices…"

A Decolonial Feminism grapples with the central issues in feminist debates today: from Eurocentrism and whiteness, to power, inclusion, and exclusion. Delving into feminist and anti-racist histories, Verges also assesses contemporary activism, movements, and struggles, including #MeToo and the Women's Strike.

Centering anticolonialism and anti-racism within an intersectional Marxist feminism, the book puts forward an urgent demand to free ourselves from the capitalist, imperialist forces that oppress us.
Françoise Vergès is an activist and public educator. She holds a PhD in Political Science from the University of California, Berkeley, and is the author of many books including A Decolonial Feminism and Wombs of Women.
'A vibrant and compelling framework for feminism in our times'
Judith Butler