The Night Is Alive (Krewe of Hunters #10) (Mass Market Paperbound) 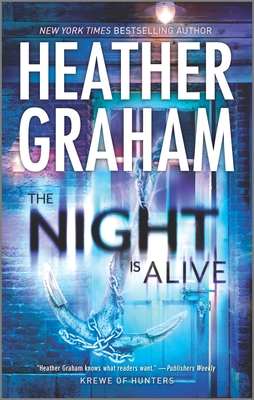 The Night Is Alive (Krewe of Hunters #10) (Mass Market Paperbound)

This is book number 10 in the Krewe of Hunters series.

MIDNIGHT IN SAVANNAH... It's a city of beauty, history...hauntings. And one of the most haunted places in Savannah is a tavern called The Dragonslayer, built in the 1750s. The current owner, Gus Anderson, is a descendant of the original innkeeper and his pirate brother, Blue. Gus summons his granddaughter, Abigail, home from Virginia, where she's studying at the FBI Academy. When she arrives, she's devastated to find him dead. Murdered. But Abby soon learns that Gus isn't the only one to meet a brutal and untimely end; there've been at least two other victims. Then Captain Blue Anderson starts making ghostly appearances, and the FBI's paranormal investigation unit, the Krewe of Hunters, sends in Agent Malachi Gordon. Abby and Malachi have a similar ability to connect with the dead...and a similar stubbornness. Sparks immediately begin to fly--sparks of attraction and discord. But as the death toll rises, they have to trust each other or they, too, might find themselves among the dead haunting old Savannah.
"New York Times" and "USA Today" bestselling author Heather Graham has written more than a hundred novels. She's a winner of the RWA's Lifetime Achievement Award, and the Thriller Writers' Silver Bullet. She is an active member of International Thriller Writers and Mystery Writers of America. For more information, check out her websites: TheOriginalHeatherGraham.com, eHeatherGraham.com, and HeatherGraham.tv. You can also find Heather on Facebook.

Graham deftly weaves elements of mystery, the paranormal and romance into a tight plot that will keep the reader guessing at the true nature of the killer's evil. -Publishers Weekly on The Unseen

Suspenseful and dark. The culture and history surrounding San Antonio and the Alamo are described in detail. The transitions between past and present flow seamlessly, and the main characters are interesting and their connection to one another is believable. -RT Book Reviews on The Unseen

"A fast-paced story, involving history and ghost stories. Graham is skilled at creating intriguing, mature characters involved in challenging situations.... The investigators who work for the unusual Krewe of Hunters could take cases any place in the country. The Unseen takes them to San Antonio, Texas. Let's hope these unique teams continue to operate in Heather Graham's future paranormal novels of suspense." -Lesa's Book Critiques on The Unseen

"If you like mixing a bit of the creepy with a dash of sinister and spine-chilling reading with your romance, be sure to read Heather Graham's latest.... Graham does a great job of blending just a bit of paranormal with real, human evil." -Miami Herald on Unhallowed Ground


"The paranormal elements are integral to the unrelentingly suspenseful plot, the characters
are likable, the romance convincing and, in the wake of Hurricane Katrina, Graham's atmospheric depiction of a lost city is especially poignant." -Booklist on Ghost Walk


"Graham's rich, balanced thriller sizzles with equal parts suspense, romance and the paranormal-all of it nail-biting." -Publishers Weekly on The Vision