When the White Pine Was King: A History of Lumberjacks, Log Drives, and Sawdust Cities in Wisconsin (Paperback) 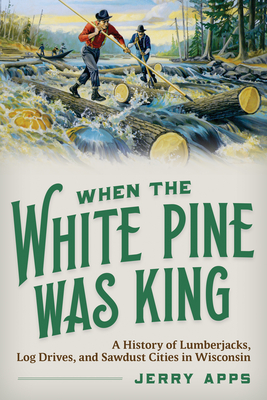 When the White Pine Was King: A History of Lumberjacks, Log Drives, and Sawdust Cities in Wisconsin (Paperback)


Usually Ships in 1-5 Days
“From the ring of the ax in the woods, to the scream of the saw blade in the mill, to the founding of many of Wisconsin’s communities, Jerry Apps does an outstanding job bringing Wisconsin’s logging and lumbering heritage to life.”—Kerry P. Bloedorn, director, Rhinelander Pioneer Park Historical Complex

For more than half a century, logging, lumber production, and affiliated enterprises in Wisconsin’s Northwoods provided jobs for tens of thousands of Wisconsinites and wealth for many individuals. The industry cut through the lives of nearly every Wisconsin citizen, from an immigrant lumberjack or camp cook in the Chippewa Valley to a Suamico sawmill operator, an Oshkosh factory worker to a Milwaukee banker.
When the White Pine Was King tells the stories of the heyday of logging: of lumberjacks and camp cooks, of river drives and deadly log jams, of sawmills and lumber towns and the echo of the ax ringing through the Northwoods as yet another white pine crashed to the ground. He explores the aftermath of the logging era, including efforts to farm the cutover (most of them doomed to fail), successful reforestation work, and the legacy of the lumber and wood products industries, which continue to fuel the state’s economy.
Enhanced with dozens of historic photos, When the White Pine Was King transports readers to the lumber boom era and reveals how the lessons learned in the vast northern forestlands continue to shape the region today.

Jerry Apps was born and raised on a central Wisconsin farm. He is a former county extension agent and professor emeritus for the College of Agriculture and Life Sciences at the University of Wisconsin–Madison. Today he works as a rural historian, full-time writer, and creative writing instructor. Jerry is the author of more than forty fiction, nonfiction, and children’s books with topics ranging from barns, one-room schools, cranberries, cucumbers, cheese factories, and the humor of mid-America to farming with horses and the Civilian Conservation Corps. He and his wife, Ruth, have three grown children, seven grandchildren, and two great-grandchildren. They divide their time between their home in Madison and their farm, Roshara, in Waushara County.