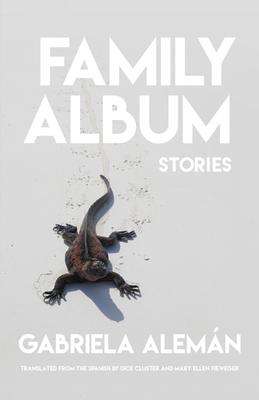 Finalist for the Republic of Consciousness Prize

Alem n is known for her spirited and sardonic take on the fatefully interconnected--and often highly compromised--forces at work in present-day South America, and particularly in Ecuador. In this collection of eight hugely entertaining short stories, she teases tropes of hardboiled detective fiction, satire, and adventure narratives to recast the discussion of national identity. A muddy brew of pop-culture and pop-folklore yields intriguing, lesser-known episodes of contemporary Ecuadorian history, along with a rich cast of unforgettable characters whose intimate stories open up onto a vista of Ecuador's place on the world stage.

From a pair of deep-sea divers using Robinson Crusoe's map of a shipwreck to locate sunken treasure in the Gal pagos Archipelago, to a night with the husband of Ecuador's most infamous expat, Lorena Bobbitt, this series of cracked "family portraits" provides a cast of picaresque heroes and anti-heroes in stories that sneak up on a reader before they know what's happened: they've learned a great deal about a country whose more well known exports--soccer, coffee and cocoa--mask an intriguing national story that's ripe for the telling.

One of The Millions Most Anticipated Books for 2022

"Plays with tropes ranging from the Robinson Crusoe story to the classic betrayed-wife setup to wrestle with the impossible-to-decode oddness of human life, which old stories can only hide for so long."--Lily Meyer, NPR

"It takes a rare and talented writer to create a cast of characters who each feel so unique, distinct, and whose stories unravel unexpectedly while also feeling inevitable, exactly right. Thoughtful and subversive, with Family Album, Alem n has given us a gift."--Jean Kyoung Frazier, author of Pizza Girl

"Divers, adventurers, wrestlers, athletes: a diverse array of people come to light in these stories to insist again and again in challenging the weight of the written letter. Gabriela Alem n's stories inhabit the past to work through its possible versions. Her characters understand that History is a form of desire and the truth is not a house but a patina covering a place that has ceased to exist."--Yuri Herrera, author of A Silent Fury: The El Bordo Mine Fire

"Gabriela Alem n's stories unravel a rich and intriguing universe in which nothing, and no one, is what it seems."--Pilar Quintana, author of The Bitch

"These stories are like lizards lying on rocks in the sun. When you try to pick one up it darts away and disappears. Sometimes a tail comes off in your hand or the thing bites your fingers and drops of blood decorate the rock. Best read while listening to Julio Jaramillo sing 'Amor sin Esperanza' and 'Hojas Muertas.'"--Barry Gifford, author of Sailor & Lula: The Complete Novels

"Gabriela Alem n writes beautiful, sly, enigmatic stories originating in a rogues gallery of real life legends, including El Santo and John Wayne Bobbitt, as well as lesser known and invented souls, all of them struggling against the silent--or is it hostile?--backdrop of Ecuador's past and present. Family Album is a mordantly funny and haunting collection."--Zachary Lazar, author of Vengeance