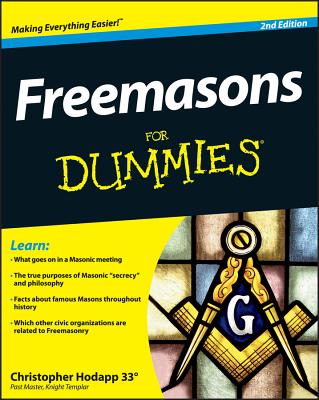 Fascinated by Freemasons? Freemasons For Dummies is the internationally bestselling introduction to the Masons, the oldest and largest secret society in the world. This balanced, eye-opening guide demystifies Freemasonry, explaining everything from its elaborate rituals and cryptic rites, to its curious symbols and their meanings.

With new and improved content, including updated examples and references throughout, this new edition of Freemasons For Dummies provides the most straightforward, non-intimidating guide to the subject on the market.

If you're intrigued by the mystery that surrounds the Masons, get ready to learn the facts about this ancient order in Freemasons For Dummies.

Christopher Hodapp has been an active Freemason and board member in his home state of Indiana for many years and holds memberships in several national Masonic organizations. He has written numerous articles and has contributed to several documentaries about Masonry. He is editor of the Journal of the Masonic Society and has authored and co-authored several books on the topic including The Templar Code For Dummies and Conspiracy Theories & Secret Societies For Dummies.