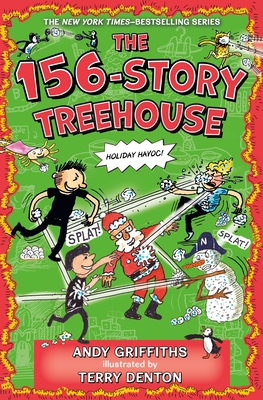 This is book number 12 in the The Treehouse Books series.

Andy and Terry live in a 156-story treehouse. (It used to be a 143-story treehouse, but they added 13 more levels.) It has a wishing well, a super-stinky stuff level, a bouldering alley (it’s just like bowling, except you use boulders instead of balls), an enigma engine, a TV quiz show level hosted by Quizzy the quizzical robot, and the amazing mind-reading sandwich-making machine that knows exactly what sort of sandwich you want and makes it for you.

It’s the night before Christmas but Andy and Terry aren’t ready yet! They haven’t written their letters to Santa, they haven’t sung any carols or hung their stockings, and now Mr. Big Nose wants their next book done by tomorrow. When Santa Claus’s sleigh crash-lands in the treehouse, the reindeer become tangled in the branches and Santa falls into the cloning machine. With dozens of Santas running around and no way to tell which one’s the real one, who’s going to deliver all the presents? It’s up to Andy, Terry, and Jill to work together to save Christmas—and maybe even finish their book on time!

Praise for Andy Griffiths and the Treehouse series:

"Will appeal to fans of Jeff Kinney and Dav Pilkey. . . . The wonderfully random slapstick humor is tailor-made for reluctant readers. . . . A treat for all." —Booklist on The 13-Story Treehouse

"Twice the treehouse, twice the fun? You bet . . . Denton's furiously scrawled line drawings milk the silly, gross-out gags for everything they're worth. Kids should be flipping pages faster than a pair of inflatable underpants can skyrocket the young heroes to safety." —Publishers Weekly, starred review, on The 26-Story Treehouse

"Look, if you haven't heard of the Treehouse series by now, you probably don't know many kids. ... Chock-full of mischief, wonder and imagination." —The Sydney Morning Herald, on The 156-Story Treehouse