The Girl Who Survived: A Riveting Novel of Suspense with a Shocking Twist (Hardcover) 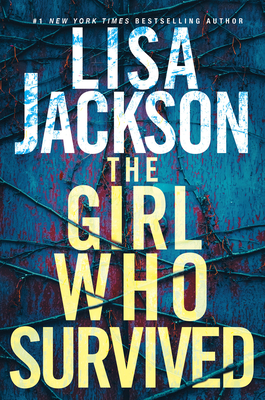 The Girl Who Survived: A Riveting Novel of Suspense with a Shocking Twist (Hardcover)


Usually Ships in 1-5 Days
In this deviously volatile, deliciously creepy thriller from the #1 New York Times bestseller, the lone survivor of a brutal family massacre must uncover the awful truth about the fateful night that left her forever marked…

Has she already had her last chance to be the final girl?

All her life, she’s been the girl who survived. Orphaned at age seven after a horrific killing spree at her family’s Oregon cabin, Kara McIntyre is still searching for some kind of normal. But now, twenty years later, the past has come thundering back. Her brother, Jonas, who was convicted of the murders has unexpectedly been released from prison. The press is in a frenzy again. And suddenly, Kara is receiving cryptic messages from her big sister, Marlie—who hasn’t been seen or heard from since that deadly Christmas Eve when she hid little Kara in a closet with a haunting, life-saving command: Don’t make a sound.

As people close to her start to die horrible deaths, Kara, who is slowly and surely unraveling, believes she is the killer’s ultimate target.

Kara survived once. But will she survive again? How many times can she be the girl who survived?
Lisa Jackson is the #1 New York Times bestselling author of over ninety-five novels, including Liar, Liar, You Will Pay, After She’s Gone, Deserves to Die, You Don’t Want to Know, Running Scared, and Shiver. She is also the co-author of One Last Breath, Last Girl Standing and the Colony Series, written with her sister and bestselling author Nancy Bush, as well as the collaborative novels Sinister and Ominous, written with Nancy Bush and Rosalind Noonan. There are over thirty million copies of her novels in print and her writing has been translated into twenty languages. She lives with her family and rambunctious dogs in the Pacific Northwest. Visit her online at LisaJackson.com.
Praise for Lisa Jackson's Standalone Suspense Novels:

“Jackson’s latest is a fabulous fast-paced, tightly plotted thriller with so many twisty angles, no Vegas bookie would make odds. The character development is superb, and the police investigation and Remmi’s need for answers rings true. The authors managing of the past and present separately is an effective method of clue dangling to keep readers in the dark until the huge OMG reveal. Fans of Lisa Gardner, Paula Hawkins, and J.T. Ellison will devour this one-sitting nail-biter.” —Library Journal STARRED REVIEW for Liar, Liar

“The title of Lisa Jackson's latest, Paranoid, is pretty apt, considering it will have your nerves frayed before you're even halfway through reading it.” —Popsugar on Paranoid

"Bestselling Jackson jam-packs the plot of her latest nail-biting novel with plenty of unexpected twists and turns, making Liar, Liar a terrific choice for readers who enjoy their literary adrenaline fixes on the darker side of the suspense spectrum." —Booklist for Liar, Liar

"A twisty, suspenseful romantic thriller… The many threads of this action-packed mystery are tied together by the mesmerizing, larger-than-life character of Didi Storm, who haunts the book to its final pages." —Publishers Weekly, STARRED REVIEW for Liar, Liar “

This suspenseful thriller is packed with jaw-dropping twists.” —InTouch, Grade A for You Will Pay

“If you tend to reach for a twisty, intense thriller for your beach reads, then this is the book for you. From #1 New York Times bestselling author Lisa Jackson, You Will Pay will have you glued to the storyline.” —Martha Stewart Weddings on You Will Pay

“This acclaimed author is back to captivate her fans. And as always, the fans are gifted with a real page-turner… A ‘class-A’ writer who can combine everything from romance to suspense to a real creep fest as easily as Martha Stewart can create a killer cupcake, Jackson has made sure to invent a story where everyone will go home to the ‘place’ they love and…think twice about going inside. Excellent read!” —Suspense Magazine on Close to Home

“Jackson gradually builds up the layers of this tangled psychological thriller, leading to a stunning finale.  Jackson knows how to keep readers guessing and glued to the page.” —Publishers Weekly on Paranoid