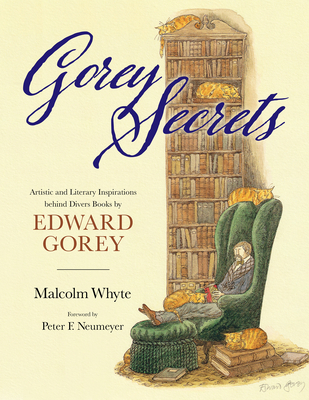 
Usually Ships in 1-5 Days
Edward Gorey (1925-2000) was a fascinating and prolific author and artist. Of the one hundred delightful and fascinating books that Gorey wrote and illustrated, he rarely revealed their specific inspirations or their meanings. Where did his intriguing ideas come from? In Gorey Secrets: Artistic and Literary Inspirations behind Divers Books by Edward Gorey, Malcolm Whyte utilizes years of thorough research to tell an engrossing, revealing story about Gorey's unique works. Exploring a sampling of Gorey's eclectic writings, from The Beastly Baby and The Iron Tonic to The Curious Sofa and Dracula, Whyte uncovers influences of Herman Melville, Agatha Christie, Edward Lear, the I Ching, William Hogarth, Rene Magritte, Hokusai, French cinema, early toy books, eighteenth-century religious tracts for children, and much more. With an enlightening preface by Gorey collaborator and scholar Peter F. Neumeyer, Gorey Secrets brings important, uncharted insight into the genius of Edward Gorey and is a welcome addition to collections of both the seasoned Gorey reader and those who are just discovering his captivating books.
Malcolm Whyte is a graduate of Cornell University and has created more than two hundred books for readers of all ages. He published Gorey Games and Goreyography and curated nine exhibitions of Edward Gorey's books, drawings, and graphics, for two of which he wrote and produced catalogs. Whyte is a collector of illustrated books and contemporary American art including original cartoon art, American Indian art, and old master prints. Peter F. Neumeyer collaborated on three books with Edward Gorey and is editor of Floating Worlds: The Letters of Edward Gorey and Peter F. Neumeyer. He has taught at Harvard University, Stony Brook University, and San Diego State University.