The Price of Principle: Why Integrity Is Worth the Consequences (Hardcover) 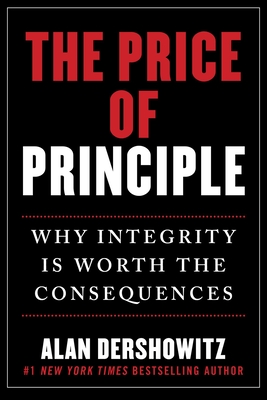 The Price of Principle: Why Integrity Is Worth the Consequences (Hardcover)


Usually Ships in 1-5 Days
In his fiftieth book, The Price of Principle: Why Integrity Is Worth the Consequences, Alan Dershowitz—#1 New York Times bestselling author and one of America’s most influential legal scholars—explores the implications of the increasing tendency in politics, academia, media, and even the courts of law to punish principle and reward partisan hypocrisy.

Alan Dershowitz has been called “one of the most prominent and consistent defenders of civil liberties in America” by Politico, and “the nation’s most peripatetic civil liberties lawyer and one of its most distinguished defenders of individual rights” by Newsweek. Yet, he has come under intense criticism for living by his principles and applying his famed “shoe on the other foot test.”

The Price of Principle is about efforts to cancel Alan Dershowitz and his career because he has insisted on sticking to his principles instead of choosing sides in the current culture and political war dividing our country. He explains that principled people are actively punished for not being sufficiently partisan. Principle has become the vice and partisanship the virtue in an age when partisan ends justify unprincipled means, such as denial of due process and free speech in the interest of achieving partisan or ideological goals.

Throughout his narrative, Dershowitz focuses on three sets of principles that have guided his life: 1) freedom of expression and conscience; 2) due process, fundamental fairness, and the adversary system of seeking justice; and 3) basic equality and meritocracy. He documents the attacks on him and others like him for being “guilty” of refusing to compromise important principles to promote partisanship. He names names and points fingers of accusation at those who have led us down this dangerous road.

In the end, The Price of Principle represents an icon in the defense of free speech and due process reckoning with the challenges of unprincipled attacks—a new brand of McCarthyism—and insisting that we ask hard questions about our own moral principles.

Alan Dershowitz is one of the most celebrated lawyers in the world. He was the youngest full professor in Harvard Law School history where he is now the Felix Frankfurter Professor of Law, Emeritus. The author of numerous bestselling books, from Chutzpah to Guilt by Accusation to The Case Against Impeaching Trump to The Best Defense to Reversal of Fortune (which was made into an Academy Award–winning film) to Defending Israel, Dershowitz has advised presidents and prime ministers and has represented many prominent men and women, half of them pro bono.
“Mazal tov to Alan for his important fiftieth book about the ‘frightening devolution from principle to partisanship.’ In my inaugural address, I spoke about the dangers of political polarization and about the critical importance of dialogue and genuine respect for the other. I hope that Alan Dershowitz’s book fosters an honest dialogue that enriches rather than costs jobs, reputations—and even friendships.”
—Isaac Herzog, President of the State of Israel

“Forty-five years ago, when I was in the Soviet prison, Alan Dershowitz’s voice—as my lawyer and on behalf of democratic dissidents behind the Iron Curtain—was principled, powerful, and effective. His new timely book, The Price of Principle, raises important contemporary issues of partisanship, the breakdown of civil discourse and norms of free speech, and the polarization of American public life as seen in cancellation and intolerance of dissent.”
—Natan Sharansky, former Soviet refusnik, Israeli leader, author, and human rights activist

“I have known Alan Dershowitz for almost fifty years. Whether or not you agree with him on any particular occasion, he is absolutely a man of principle.”
—Susan Estrich, partner Estrich Goldin LLP, former professor at Harvard Law School and USC

“Alan Dershowitz’s commitment to his principles is today consistent with those he held as a Yale law student in 1959. The world has changed but not Dersh. At eighty-three he stands as unbowed as he ever was. As courageous and provocative an advocate as the American legal community can boast.”
—Stephen Joel Trachtenberg, president emeritus of George Washington University

“Alan Dershowitz is an unapologetic, principled, and consistent liberal. He stands in the best tradition of defense attorneys who zealously represent even the most despised defendants.”
—Ronald S. Sullivan, Jr., Jesse Climenko Clinical Professor of Law, Harvard Law School

“I have strongly disagreed with Alan Dershowitz on particular civil liberties issues, some of which I have debated with him on national TV shows. However, I respect the fact that his positions reflect his understanding of constitutional law and civil liberties principles, which he applies consistently, regardless of the identities or ideologies involved in particular situations. In a political and cultural climate where partisan ‘tribes’ wield increasing power, I am happy to join Dershowitz—and others with whom I disagree on particular issues—in the heterogeneous ‘tribe’ of supporters of classical liberal values.”
—Nadine Strossen, John Marshall Harlan II Professor of Law, Emerita, New York Law School

“Alan Dershowitz, a principled man who takes the barbs better than anybody because he sticks to his principles and he doesn't really care whether you like him, and that's why he has fights with Larry David."
—Megyn Kelly, host of The Megyn Kelly Show

“An intellectual heavyweight.”
—The Economist

“In fifty years of working with Alan Dershowitz, I have never met a more principled or honest advocate for truth.”
—Irwin Cotler, former Attorney General and Minister of Justice of Canada