Portable Magic: A History of Books and Their Readers (Hardcover) 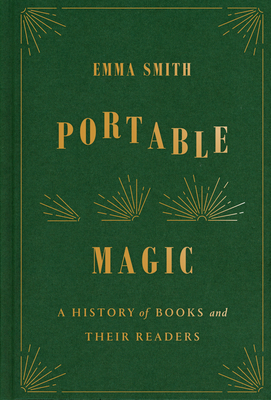 Portable Magic: A History of Books and Their Readers (Hardcover)


Usually Ships in 1-5 Days
A history of one of humankind’s most resilient and influential technologies over the past millennium—the book. Revelatory and entertaining in equal measure, Portable Magic will charm and challenge literature lovers of all kinds as it illuminates the transformative power and eternal appeal of the written word.

Stephen King once said that books are “a uniquely portable magic.” Here, Emma Smith takes readers on a literary adventure that spans centuries and circles the globe to uncover the reasons behind our obsession with this captivating object.

From disrupting the Western myth that the Gutenberg Press was the original printing project, to the decorative gift books that radicalized women to join the anti-slavery movement, to paperbacks being weaponized during World War II, to a book made entirely of plastic-wrapped slices of American cheese, Portable Magic explores how, when, and why books became so iconic. It’s not just the content within a book that compels; it’s the physical material itself, what Smith calls “bookhood”: the smell, the feel of the pages, the margins to scribble in, the illustrations on the jacket, its solid heft. Every book is designed to influence our reading experience—to enchant, enrage, delight, and disturb us—and our longstanding love affair with books in turn has had direct, momentous consequences across time.
EMMA SMITH is Professor of Shakespeare Studies at Oxford University, and the author of This Is Shakespeare (2020). She lives in Oxford, England.
“An enthralling, timely, and spirited tour through the history of the book… Powerful… Portable Magic brims with insights, causing its reader to feel as though it might at any moment burst forth from its binding… A remarkable reminder of how books bear witness to their own histories — as well as, in various senses, those of their readers.”
—Daniel Blank, Los Angeles Review of Books

"A delightful examination of the symbol and meaning behind physical texts, for people who love books... [Smith] argues convincingly, a book is never just a book. And perhaps that's why despite a decade of premature obituaries, books are alive as ever."
—Randy Rosenthal, Minneapolis Star Tribune

"Long after details of plot, character, and setting have vanished from memory, the sensual traces of a book’s paper, typeface, and binding linger... Emma Smith wants us to focus on the materiality of those packages of ink squiggles that inform, amuse, annoy, and inspire us... While she revels in the dazzling variety of physical objects we can call books, Smith also cautions against “a curious overinvestment in the book as a sacred object.” Her own breezy book is meant not to be collected but to be read."
—Steven G. Kellman, The American Scholar

"A lively and engaging survey... Covers an impressive amount of ground... Though Portable Magic reflects the work of a careful scholar, it will delight the thoughtful general reader. Any bibliophile will come away from it with a renewed appreciation for books and the central role they still play in our lives."
—BookPage

“Smith’s work is a delight for bibliophiles, historians, and curious readers craving an unconventional piece of nonfiction... The author’s trenchant analysis, attention to detail, and conversational tone combine to make a page-turning historical study... A fascinating material history of the book told through a geopolitical lens.”
—Kirkus

“Entertaining… With wit and verve, Smith concludes that a book becomes a book ‘in the hands of its readers... a book that is not handled and read is not really a book at all.’ Readers should make space on their shelves for this dazzling and provocative study.”
—Publishers Weekly, starred

"Amusing, informative and reverential, Portable Magic is an invitation to dwell on and celebrate the book in its physical form, resulting in nothing short of a reader's delight... Razor-sharp... All this is done with a conversational levity that is both beguiling and surprising: I did not expect to be laughing out loud at this book...  Portable Magic is so well-written that you'll be itching to mark up multiple lines."
—BookBrowse

A Guardian and The Times Best Summer Read

"Alive in equal measure to the magic and the badness of books, Smith... charts the both the history of the book itself and the history of our relationship with it in all its equivocality... Anyone who picked up Smith’s excellent This Is Shakespeare will be familiar with the combination of deep scholarship and down-to-earth wit she brings to her subjects, and Portable Magic continues in the same charming vein. Applying the same methods to a much broader topic with similarly engaging effect, Smith proceeds here with enviable lightness of touch, mingling the serious and the silly as she goes... Rather brilliant."
—Tim Smith-Laing, The Telegraph (UK)

"Brilliantly written… Joyful… Smith reminds us of the thrills and spills of shabby covers, the illicit delight of writing in margins when you have been told not to and the guilty joy that comes from poring over traces left by someone else. It is these haptic, visceral and even slightly seedy pleasures of ‘bookhood’ that she brings so brilliantly to life.”
—Kathryn Hughes, The Guardian (UK)

"A fascinating journey into our relationship with the physical book...I lost count of the times I exclaimed with delight when I read a nugget of information I hadn't encountered before."
—Val McDermid, The Times (UK)