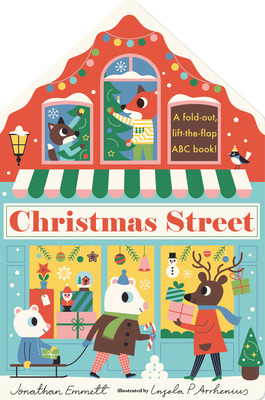 
Usually Ships in 1-5 Days
This spectacular lift-the-flap Christmas alphabet story is a book, a fold-out play-scene, and a beautiful festive frieze to decorate your room—the perfect Christmas gift!

Everyone is busy on Christmas Street! Who is baking gingerbread? Who is wrapping presents? And who's that coming down the chimney? Find out in this follow-up to Alphabet Street. And after you read the rhyming story, lift the flaps to learn the letters of the alphabet and seasonal words. Then flip the book and have fun with the giant snowy concertina play-scene on the reverse! With two large, sturdy flaps on every spread; bright, cheerful artwork from Ingela P. Arrhenius, illustrator of the best-selling series of lift-the-felt-flap board books and the Peekaboo board book series; and a clever rhyming text from Jonathan Emmett, this is a charming Christmas alphabet book that little ones will return to again and again.
Jonathan Emmett worked as an architect before becoming a children’s author and novelty book designer. He is the author of more than sixty books, including Alphabet Street, and his work has been translated into more than thirty languages. He likes building things and taking things apart, playing games and solving puzzles, and letting his imagination run riot. Jonathan Emmett lives in England.

Ingela P. Arrhenius is a freelance illustrator and graphic designer who has always loved to draw. She is the author-illustrator of Animals, City, Pop-up Ocean, Pop-up Jungle, and Pop-up Things That Go, as well as the illustrator of the Peekaboo board book series and the series of lift-the-felt-flap board books. Ingela P. Arrhenius lives and works in Sweden.
With a joyous lift-the-flap holiday alphabet tale and a fold-out play-scene, this festive story is one of the best Christmas books for kids who are broadening their vocabulary. . . . Plus, the story itself is adorable, as you read about what the animal inhabitants of Christmas Street are up to on the lead up to the big holiday, such as baking gingerbread and wrapping presents.
—Romper