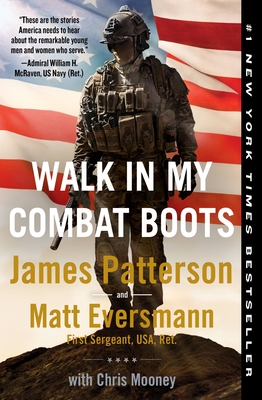 
Usually Ships in 1-5 Days
Discover “the stories America needs to hear” (Admiral William H. McRaven, US Navy (Ret.)) with these moving and powerful recollections of war, told by the men and women who lived them.

Walk in my Combat Boots is a powerful collection crafted from hundreds of original interviews by James Patterson, the world’s #1 bestselling writer, and First Sergeant US Army (Ret.) Matt Eversmann, part of the Ranger unit portrayed in the movie Black Hawk Down.

These are the brutally honest stories usually only shared amongst comrades in arms. Here, in the voices of the men and women who’ve fought overseas from Vietnam to Iraq and Afghanistan, is a rare eye-opening look into what wearing the uniform, fighting in combat, losing friends and coming home is really like. Readers who next thank a military member for their service will finally have a true understanding of what that thanks is for.

James Patterson is the world's bestselling author. The creator of Alex Cross, he has produced more enduring fictional heroes than any other novelist alive. He lives in Florida with his family.

Matt Eversmann retired from the Army after twenty years of service. His last assignment was as an Infantry Company First Sergeant in the 10th Mountain Division during the surge in Iraq. He spent almost half of his career in the 75th Ranger Regiment and was a member of Task Force Ranger, the unit immortalized in the film Black Hawk Down. Matt and his family live in West Palm Beach where he runs his own consulting company, Eversmann Advisory.

Chris Mooney is the international bestselling author of fourteen thrillers. The Mystery Writers of America nominated Remembering Sarah for an Edgar Award. He teaches creative writing at Harvard.

"Up close war is a tapestry of individual stories, as painfully raw, improbably funny, and completely human as the soldiers themselves. James Patterson and my former Ranger comrade Matt Eversmann, have brilliantly woven together an image that is as compelling as it is entertaining." —Stanley A. McChrystal, General, US Army (Ret.)

"This book will take your breath away, break your heart, and leave you in awe of the hard work, raw courage, ingenuity and resilience of the men and women who wear the boots. You'll hear them say why they do it, and how they deal with triumph, tragedy and living with the legacy of their service. Every American should read it." —President Bill Clinton

"James Patterson is one of America's great storytellers. He is a also a first-rate reporter. He and Eversmann have collected stories of brave men and women who have defended our country. Each one is a profile in courage. Read this book and you will have even greater respect for those who serve in our military." —Chris Wallace, anchor, FOX News Sunday

"Combat is hard to make sense of. Probably because, in many ways, it makes no sense. James Patterson and Matt Eversmann's unvarnished portrayal of soldiers is right on. Each of these stories of the personal experience of combat is unique, homespun, and honest. God bless them, one and all." —Brigadier General Peter Dawkins, US Army (Ret.)

“A vivid and authentic portrait of life in the modern military … Powerful. This edifying collection captures the highs and lows of the military experience.”—Publishers Weekly

“Urgent and full of suspense. . . In this wide-ranging, consistently absorbing collection, the authors cover the entire spectrum of American military action during the last 50 years, from Vietnam to the ongoing conflicts in Afghanistan and Iraq . . . A gripping account of American military members’ experiences before, during, and after wartime.”—Kirkus, starred review

“Extraordinarily well-written . . . Walk in My Combat Boots should be mandatory reading for every American citizen. These stories demonstrate that ‘the greatest generation’ is not confined to the World War II era. Those who currently wear the military uniform are worthy successors to those American soldiers, sailors, airmen and Marines who have shed their collective blood on the altar of freedom throughout our nation’s history.”—Army magazine