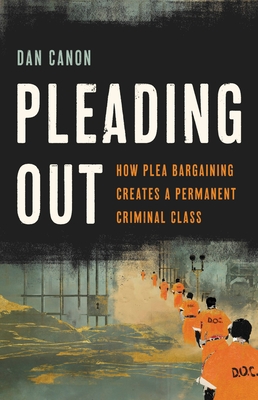 A blistering critique of America’s assembly-line approach to criminal justice and the shameful practice at its core: the plea bargain

Most Americans believe that the jury trial is the backbone of our criminal justice system. But in fact, the vast majority of cases never make it to trial: almost all criminal convictions are the result of a plea bargain, a deal made entirely out of the public eye.

Law professor and civil rights lawyer Dan Canon argues that plea bargaining may swiftly dispose of cases, but it also fuels an unjust system. This practice produces a massive underclass of people who are restricted from voting, working, and otherwise participating in society. And while innocent people plead guilty to crimes they did not commit in exchange for lesser sentences, the truly guilty can get away with murder.

With heart-wrenching stories, fierce urgency, and an insider’s perspective, Pleading Out exposes the ugly truth about what’s wrong with America’s criminal justice system today—and offers a prescription for meaningful change.

Dan Canon is a civil rights lawyer and a law professor at the University of Louisville in Kentucky. In his practice, he has served as counsel for plaintiffs in the US Supreme Court case Obergefell v. Hodges, which brought marriage equality to all fifty states, and in a number of other high-profile cases. He lives in southern Indiana.

“[a] well-reasoned polemic…. Full of persuasive evidence of how the courts are used by those in power to enforce the status quo, this is a cogent call for change.”—Publishers Weekly

“A full-throated denunciation of a judicial system grown lazy, complacent, and overly given to forcing confessions for its own convenience….A compelling document of interest to anyone concerned with civil rights and an equitable system of justice.”—Kirkus

The reality of the American criminal justice system, as Dan Canon illustrates, is that most defendants never get a trial, and instead are coerced into ‘plea bargains’ that are, principally, good deals for the state. Pleading Out offers a compelling critique of the practice of plea bargaining and a vision for abandoning it in order to reclaim criminal justice.—David Cole, national legal director, ACLU

To understand the tragic failure of American criminal justice, you must understand the scourge of plea bargaining. To understand plea bargaining, read this book. With riveting storytelling and sharp analysis, Canon describes the everyday monstrosity, unchecked and ruinous, lurking behind the legal system’s closed doors.—Adam Benforado, New York Times–bestselling author of Unfair

Canon questions a core tenet of American justice with a keen mind and sharp pen. Plea bargaining is held up as a necessary norm but Pleading Out exposes a system that is coercive and inequitable—while also offering hope for the future. This accessible book should be read by anyone who believes our legal system should be just.—Andrew L. Seidel, author of The Founding Myth