A Strike to the Heart (Paperback) 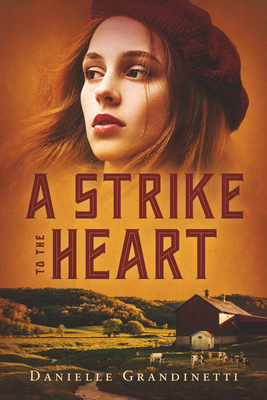 A Strike to the Heart (Paperback)

Wisconsin, 1933--When a routine mission becomes an ambush that kills his team, Craft Agency sniper Miles Wright determines to find the persons responsible and protect the woman he rescued. But the fierce independence that led Lily Moore to leave her family's dairy business for the solitary life of a dog trainer and the isolation of her farm don't make that easy. Neither does his unwanted attraction to her. Meanwhile, escalating incidents confirm that she's far from safe.

Lily fears letting the surprisingly gentle retired marine into her life almost as much as she fears whoever is threatening her. As Wisconsin farmers edge toward another milk strike, one that will surely turn violent, it becomes clear that the plot against Lily may be part of a much larger conspiracy. When the search for her abductor leads close to home, she must decide whether to trust her family or the man who saved her life.

With a family heritage of dairy farmers and immigrants, Danielle Grandinetti grew up on stories told to her by her grandparents, parents, aunts, and uncles of living on a farm, being an Italian in Chicago, and surviving wars and the Great Depression. It's why she writes of finding home in hard times. After nearly two decades in education, Danielle is now a book blogger at DaniellesWritingSpot.com. Her short stories have appeared in several publications, and her writing has won the University of Northwestern Distinguished Faith in Writing Award. A Chicagoland native, she lives along Lake Michigan's Wisconsin shoreline with her husband and their two young sons. Danielle especially loves quiet mornings served with the perfect cup of tea.