Skandar and the Phantom Rider (Hardcover) 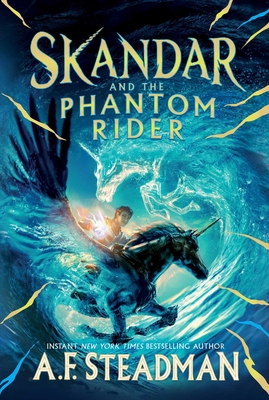 Skandar and the Phantom Rider (Hardcover)

This is book number 2 in the Skandar series.

Skandar’s adventure among the warrior unicorns continues in this spectacular sequel to the instant New York Times and international bestseller Skandar and the Unicorn Thief.

Skandar Smith has achieved his dream: to train as a unicorn rider. But as Skandar and his friends enter their second year at the Eyrie, a new threat arises. Wild unicorns—supposedly immortal—are somehow being killed, an ancient prophecy warns of danger, and terrible storms begin to ravage the Island.

Meanwhile, Skandar’s sister, Kenna, longs to join him, and Skandar is determined to help her, no matter what. As the storm gathers, can Skandar find the key to stop the Island tearing itself apart before it’s too late for them all?
A.F. Steadman grew up in the Kent countryside, getting lost in fantasy worlds and scribbling stories in notebooks. Before focusing on writing, she worked in law, until she realized that there wasn’t nearly enough magic involved. She is the author of the New York Times bestselling Skandar series.