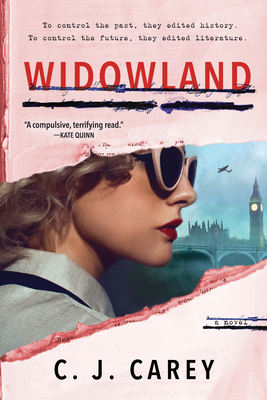 For readers of Margaret Atwood's The Handmaid's Tale comes a thrilling feminist dystopian novel set in an alternative history that terrifyingly imagines what a British alliance with Germany would look like if the Nazis had won WWII.

LONDON, 1953. Thirteen years have passed since England surrendered to the Nazis and formed a Grand Alliance with Germany. It was forced to adopt many of its oppressive ideologies, one of which was the strict classification of women into hierarchical groups based on the perceived value they brought to society.

Rose Ransom, a member of the privileged Geli class, remembers life from before the war but knows better than to let it show. She works for the Ministry of Culture, rewriting the classics of English literature to ensure there are no subversive thoughts that will give women any ideas.

Outbreaks of insurgency have been seen across the country with graffiti made up of seditious lines from forbidden works by women painted on public buildings. Suspicion has fallen on Widowland, the run-down slums where childless women over fifty have been banished. Rose is given the dangerous task of infiltrating Widowland to find the source of the rebellion before the Leader arrives in England for the Coronation ceremony of King Edward VIII and Queen Wallis.

Will Rose follow her instructions and uncover the criminals? Or will she fight for what she knows in her heart is right?

"A mind-bender of a novel about the power of literature to change minds. I loved it!" —Mark Sullivan, bestselling author of The Last Green Valley and Beneath a Scarlet Sky

"I rarely come across a book I can't put down but I devoured this one." —Rhys Bowen, New York Times bestselling author of two historical mystery series as well as several internationally bestselling historical novels

C. J. CAREY is a novelist, journalist and broadcaster. She has worked at the Sunday Times, the Daily Telegraph and the BBC, among others. She also writes novels under the name Jane Thynne and lives in London. Widowland is the first novel she has written as C. J. Carey.
"Fatherland meets The Handmaid's Tale in C.J. Carey's compelling what-might-have-been new novel. In an alternate Britain living under the rule of a victorious Hitler, where English children speak German in schools and women are separated into pro-Aryan caste lines, heroine Rose Ransom earns her living editing the English classics to remove subversive or pro-female elements. Finding herself drawn into a secret underground aiming to strike on the coronation day of Edward VIII and Queen Wallis, Rose may just find herself in the process—what she believes in, and what she is willing to die for. Widowland is a compulsive, terrifying read." — Kate Quinn, New York Times bestselling author of The Rose Code

"In Widowland, C. J. Carey has written an electrifying, Orwellian dystopia with a thrilling feminist twist. Carey renders a post-WWII alternative history that demonstrates the resilience of women and their ability to find light even in the darkest places. In Carey's expert hands, one can truly believe that literature can change the world." — Lara Prescott, New York Times bestselling author of The Secrets We Kept

"Brilliantly conceived and executed, Widowland is a mind-bender of a novel about the power of literature to change minds...I loved it!" — Mark Sullivan, bestselling author of The Last Green Valley and Beneath a Scarlet Sky

"Storytelling at its best! I rarely come across a book I can't put down but I devoured this one. It was The Handmaid's Tale but even more closely tied to the reality of our world, showing what happens to women under a totalitarian regime." — Rhys Bowen, New York Times bestselling author

"C. J. Carey takes the great 'what if' question of the twentieth century and gives it a wholly inventive feminist twist in this fascinating novel. With impressive historical research and thriller-like suspense, Carey charts heroine Rose's journey from privileged subject to brave resistor in a world that has weaponized education, social status and even memory. Tense, thought-provoking, and terrifying, Widowland is about a woman's search for truth in a world bent on destroying all traces of it." — Natalie Jenner, international bestselling author of The Jane Austen Society and the forthcoming Bloomsbury Girls

"In a world where Wollstonecraft is banned, rebel women risk everything to reclaim their power. C. J. Carey's Widowland, a brilliantly imagined alt-history dystopia where women reading is the greatest threat to totalitarian power, is a must-read cautionary tale for our times." — Samantha Silva, author of Love and Fury: A Novel of Mary Wollstonecraft

"In Widowland, C. J. Carey imagines an alternate history 13 years after England surrendered to the Nazis and formed an alliance with Germany. This chilling take vividly portrays a world where reality is replaced by fiction and literature is more threatening than the deadliest weapon. A compelling, page-turner that feels all too timely." — Jennifer Coburn, author of Cradles of the Reich

"Widowland is the perfect book for readers who want The Handmaid's Tale with a dash of Wollstonecraft. Carey has created an alternate history in which words are the ultimate weapon. Her literary references are a welcome splash of color in this gray world. Widowland is a convincing spin on a 'what if' story." — Eva Jurczyk, author of The Department of Rare Books and Special Collections

"This utterly engrossing exploration of the subversive power of literature—part thriller, part dystopian fiction, part feminist cautionary tale—is a rollicking homage to women who refuse to accept being less. It could not be more timely." — Meg Waite Clayton, internationally bestselling author of The Postmistress of Paris

"C. J. Carey's novel, Widowland, couldn't be more chilling—or dystopian—given the frightening political landscape confronting women in America and elsewhere. It is an important, and well-written book for our time... Carey astutely articulates, via her characters, her concerns about the fragility of democracy in our own times." — New York Journal of Books

"Powerfully imagined." — The Sunday Times, Book of the Month

"Austere and low-key, Widowland succeeds when it comes to evoking the drab atmosphere of an occupied nation." — The Financial Times

"Austere and low-key, Widowland succeeds when it comes to evoking the drab atmosphere of an occupied nation." — The Financial Times

"Scary, pacy and packed with period detail, Widowland is a smart, inventive imagining of what might have been." — The Daily Mail

"This one's a must-read, set in an alternative 1950s Nazi-ruled Britain where women are placed in castes and history is being rewritten." — Cosmopolitan (UK)

"Don't expect to get much done while you're reading Widowland. Let Carey's expert world-building suck you into this terrifying dystopian society while the tense narrative (think: Brave New World with a feminist literary twist) will keep you turning pages faster than you can say vive la resistance." — Refinery29 (UK)