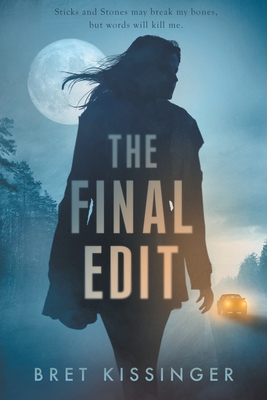 Do you ever read a book and keep thinking about it during the day because you can't wait to find out what happens next? That is The Final Edit.

On a bitterly cold Halloween night, college student Madison Monroe rode her bike home from a costume party, but she never made it. On a dark and desolate rural road, Madison was hunted down and abducted by a man in a mask.
For days, she was bound to a bed and forced to endure unforgettable horrors. Madison managed to escape, but the Man in the Mask was never caught.
Now, a decade later, Madison works as an editor of fiction, rarely leaving the safe confines of her high-rise apartment. But her status quo is shattered when she receives a sample edit from a prospective author describing in harrowing detail her past trauma, details only two people would know: Madison and the Man in the Mask.
Having captured Madison's attention, new sample edits detailing the abduction and pending murders of seemingly random women arrive. However, these chapters are not the fictional creations of an imaginative author, but the preludes to a macabre reality. With the help of a retired homicide detective and an FBI agent, Madison must piece together whatever clues she can unearth to save these women. In the process, she realizes that the secret to defeating the Man in the Mask lies in solving the mystery of her abduction all those years ago.