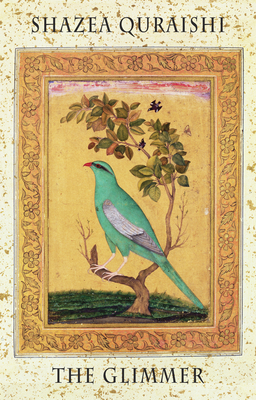 
Usually Ships in 1-5 Days
The Glimmer is a many-voiced meditation on the time-span of life and purpose of art.

In an artists' colony in Mexico, a taxidermist tends animals in their after-life, contemplating what remains of us after death. Among the artists she encounters are a painter of miniatures, a war photographer, a light artist, a ghazal singer, and dancers from Tanzteater Wuppertal, as they reflect on the impulse to make work and meaning in a world where value is increasingly monetised.

Within the extended narrative are self-contained poems ranging in form from syllabics and ghazals to OULIPO-inspired anagram poems, drawing on found text and verbatim speech to bring a choir of voices to life. The title work is followed by two elegies.

The Glimmer is Shazea Quraishi's second full-length book of poetry, following her debut, The Art of Scratching.

Shazea Quraishi is a Pakistani-born Canadian poet, playwright and translator based in London. A selection of her work was included in the Bloodaxe anthology Ten: new poets from Spread the Word in 2010 and her first pamphlet, The Courtesans Reply, was published by flipped eye in 2012. The Art of Scratching, her first book-length collection, was published by Bloodaxe Books in 2015. Her second, The Glimmer, is published by Bloodaxe in 2022. She received a Brooklease Grant from the Royal Society of Literature in 2015 and an award from the Artists International Development Fund of the British Council and Arts Council England in the same year.