The Herbivorous Butcher Cookbook: 75+ Recipes for Plant-Based Meats and All the Dishes You Can Make with Them (Hardcover) 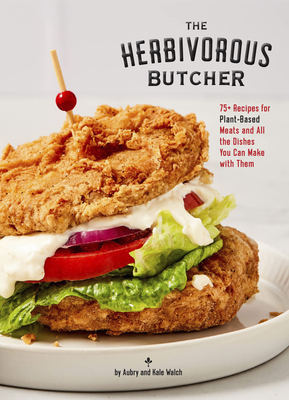 The Herbivorous Butcher Cookbook: 75+ Recipes for Plant-Based Meats and All the Dishes You Can Make with Them (Hardcover)

Think of any go-to American meat-focused cookbook. Now, imagine it vegan. From the Guamanian brother-sister duo behind the acclaimed and beloved vegan butcher shop, The Herbivorous Butcher, here are 75 innovative recipes for plant-based meats and standout vegan dishes. These are butcher shop classics (but so much healthier) such as Pork Chops, Ground Beef, and Chicken Cutlets that taste and chew as good as the real thing—perfect for vegans as well as anyone who wants to eat less meat.

Use these base recipes (or store-bought substitutes) to prepare super-tasty, hearty dishes that are—yep—totally vegan: Cherry-Glazed Rib Rack, Nashville Hot Popcorn Chicken, Kale's Very Fine Lasagna, BLT Couscous Crust Quiche, and more. With a chapter on bases, butters, and sauces that will elevate your vegan dishes, plus beautiful photography and entertaining stories, this book is a glimpse of the future—and the future tastes delicious.

AUTHORS WITH SERIOUS KNOW-HOW: Siblings Aubry and Kale Walch opened The Herbivorous Butcher in 2016, which quickly gained a cult following in their local Minneapolis and beyond. Their products are now sold in regional Whole Foods locations, and they ship a wide range of products to all 50 states and Puerto Rico. Their fans have been ardently asking for their recipes—and here they are, for the first time, in this book.

EAT LESS MEAT: Whether for health, political, or environmental convictions, more and more people are eating less meat and embracing alternative proteins. The Herbivorous Butcher Cookbook offers achievable recipes for making meat substitutes at home, as well as recipes for delicious dishes using those homemade meat substitutes (or store-bought substitutes if you’re in a pinch!).

RECIPES MADE AT HOME FROM REAL INGREDIENTS: These recipes were originally developed in home kitchens by home cooks using widely available ingredients, such as vital wheat protein and soy.

Perfect for:
Sister and brother duo Aubry and Kale Walch have spent the last several years perfecting The Herbivorous Butcher's deliciously deceiving meat-free meats. Aubry has spent over a decade creating meat-free alternatives for many of the foods that she grew up with on Guam, a place where each meal consisted of at least two different kinds of meat or seafood.

After years of watching Aubry thrive, Kale Walch followed suit and became vegan. Over the past few years, he has developed a keen sense for the many ingredients and methods that go into making the most flavorful, nutritious, and satisfying meat alternatives. Together they opened The Herbivorous Butcher in 2016 in Minneapolis. The Herbivorous Butcher Cookbook is their first book.
"I'm a huge fan of the Herbivorous Butcher's fool-your-friends vegan meats. Like so many others, I've been moving to a more plant-based diet, and now I've got more tools (and fewer excuses!) for kicking an unhealthy meat habit. Aubry and Kale have done the nearly impossible: They've created a cookbook that breaks the mold." -Rocco DiSpirito, chef, cookbook author, and television personality

"The Herbivorous Butcher is a pioneer in the plant-based deli space. Their vegan deli meats and cheeses have given me and my clients a fix for all our favorite meals. Their passion for sustainability and love for our world translates through their products. I love this book!" -Charity Morgan, author of Unbelievably Vegan

"Kale, Aubry, and their team are doing such amazing work, and I love their creativity! I personally eat a primarily plant-based diet and always love stopping by their storefront in Minneapolis. I'm excited to try these recipes at home. I truly love the passion in these recipes and know they will be an inspiration to many for more delicious plant-based foods and healthier lifestyles!" -Sean Sherman, CEO and founder, Owamni, The Sioux Chef, and Indigenous Food Lab

“There’s nothing fake about the flavor or enthusiasm behind this marvelous endeavor.”  -Publishers Weekly (starred review)