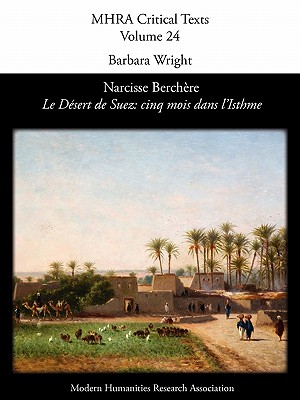 
Usually Ships in 1-5 Days
Narcisse Berch re was commissioned by Ferdinand de Lesseps to make a visual record of the first phase of the construction of the Suez Canal. To this end, he spent five months in the Isthmus, from November 1861 to March 1862. He is said, by his first biographer, Bernard Prost to have completed an 'album', containing 68 plans, drawings and watercolours. This 'album' was given by Berch re to Ferdinand de Lesseps, who then presented it to Emperor Napoleon III, via the Duc de Bassano. It was held at the Palais des Tuileries in Paris, where it is believed to have perished, when the Palace was burned down in 1871, at the time of the Commune. Fortunately, Narcisse Berch re also gave a verbal account of his experiences in a book, published by Jules Hetzel in 1863, Le D sert de Suez: cinq mois dans l'Isthme, of which this is the first new edition. Professor Wright is Fellow Emeritus of Trinity College Dublin.