Little Hawk and the Lone Wolf: A Memoir (Paperback) 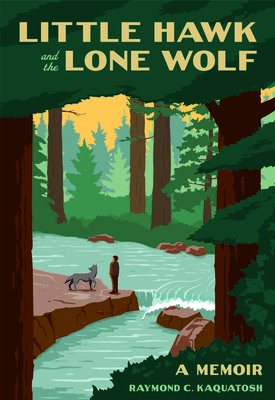 Little Hawk and the Lone Wolf: A Memoir (Paperback)


Usually Ships in 1-5 Days
“Little Hawk” was born Raymond Kaquatosh in 1924 on Wisconsin’s Menominee Reservation. The son of a medicine woman, Ray spent his Depression-era boyhood immersed in the beauty of the natural world and the traditions of his tribe and his family.
After his father’s death, eight-year-old Ray was sent to an Indian boarding school in Keshena. There he experienced isolation and despair, but also comfort and kindness. Upon his return home, Ray remained a lonely boy in a full house until he met and befriended a lone timber wolf. The unusual bond they formed would last through both their lifetimes. As Ray grew into a young man, he left the reservation more frequently. Yet whenever he returned—from school and work, from service in the Marines, and finally from postwar Wausau with his future wife—the wolf waited.
In this rare first-person narrative of a Menominee Indian’s coming of age, Raymond Kaquatosh shares a story that is wise and irreverent, often funny, and in the end, deeply moving.


Raymond Claud Kaquatosh was born in 1924 in Neopit, Wis¬consin. He spent his early years on the Menominee Indian Res¬ervation and at the Menominee Boarding School at Keshena. Ray served in the US Marine Corps in World War II and the Korean War and later attended high schools in Keshena, Wausau, and Stevens Point; Milwaukee Area Technical College; the University of Wisconsin–Milwaukee; and the University of Wisconsin Law School. In August 1947 he became one of the first Menominee Indians to earn a pilot’s certificate.

This rich, engaging memoir accomplishes so much in allowing readers access to a life that defies the stereotypes held by some people. Humorous, diligent in securing his education and livelihood, and adhering to the spiritual practices he was taught, Kaquatosh lived a full and "storied" life. With this memoir, Menominee elder Mr. Raymond Kaquatosh has bestowed an invaluable gift upon his nation, his descendants, Menominee community members, students, and educators of Wisconsin Indian history. (Debra K.S. Barker, Voyageur Magazine)